I’m not sure about you, but anytime I sit down to write, or read, or cook, or clean, or pick my eeer um movie… anything for that matter, in my head there is a song… I call it (for those of you new to my world) my mindpod. And when the little jack thingy isn’t pushed in all the way, and random lyrics suddenly escape through my piehole as the chick drops off my pay stub -think Johnny Kemp ‘just got pay-ed, Friday ni-eet. Party’s jumpin.. Feelin riiite..’ yeah, totally went there. no. I really went there a couple weeks ago. And the best part is only one person in my office was old enought to have heard that song so I had to send a link to the youtube video to several of them (the ones I like enough anyway) So it then becomes musical tourettes without the odd twitching. Its a family thing the musical tourettes, my brother’s version has lots of obscure punk and my moms has a lot of Eagles, Mama’s & Papa’s, and Little River Band and my sister’s has a lot of well shit, yeah, not gonna lie, it has shit. Then I take a amalgamation of all of them, including the shit, and just spew lyrics at random all over you when you least expect it.

So the last few weeks, the mindpod has been on overtime. But in an I’m-gonna-shufle-you-into-the-recesses-of-shit-you-forgot way. Hence the Johnny Kemp. Today and as I made my way to the barstool, er writing desk, I found myself in a Tom Petty time warp. Nope, not Mary Jane, though maybe that would calm the shit in my head yo, and not American Girl, though I could use some lotion right now. Nooo, I had Refugee… nothing to do with anything at all!! I haven’t even heard that song in for-fucking-ever. Well, the mindpod doesn’t lie so maybe my bipolar sensibilities are trying to tell me something? Or maybe it’s ADD. Because just as I decided I needed to figure out why I was trying to live like a refugee, I no longer felt the need. What the fuck yo??? I need refuge! Shelter! Something, I certainly need calm, Xanax maybe? Is my prescription current? I was at the drugstore. hhmmm. then as soon as it came to my mind, the car was on (it actually started which was a feat in and of itself) and the pod did a mad shuffle and threw me into a totally different place entirely …

“Take a drive baby up the coast, yea highway 101
I’ll pass Ventura and Santa Barbara too, just as fast as my motor runs
Gotta pocket full of memories, some happy and some are sad
Gotta girl standin’ by my side through the good times and the bad
Follow the palm trees under the California sun
I believe in love now, I believe in love again”

Now that’s better. I need a break! Work, life, work. I need to get away and take a drive! Take refuge!!! Holy shit, I’m not crazy and my mindpod did not blow a fuse. Excellent!

See you had this fear I injured my funny bone in a freak pizza tossing accident or my sarcasm font had been disabled, Fear Not! I merely took a break from my usual ranting and shit to contemplate the direction my roller coaster has been veering. Its not always easy adjusting to the sudden gee force changes that come with the bi-polar express ticket. I’m going for a ride this weekend.

Another year has passed, and we are one week from the magic baby day when the flying fur-beasts buzz about on the super-sonic, high powered, wonder-sled carrying the fat man that never seems to develop any kind of coronary disease… even though he spends his entire life gorging on the “four food groups” of candy, candy canes, candy corns and syrup. Not to mention the 24 hour cookie eating binge that would cause even the Guinness World record holding cookie eating champ to turn and run. (Can you imagine some of the hockey-puck nastyness he must be forced to choke down?? So gross) Okay maybe the fat man and the magic baby aren’t bffffs, but if they were… maybe that would explain how the fantastic 24 hour world cookie tour of sooty cylindrical conveyances actually occurs.  Maybe the star shining in the night gives the super-sonic sled some umf and maybe the fat guy isn’t fat at the beginning of the night – pre cookie binge… he just gets that way as he wolfs them down house after house.

Okay, so I don’t so much believe in magic babies or flying fat men. Whatever… that’s another day. I do believe that winter is wonderful in that the cold reminds us to care for each other… Reminds us to be good humans even if you can only muster it for a day. Whatever it is, believe in what you want, believe in something…. I believe I have been loved and cared for beyond what I thought was possible.  I believe I am a lucky girl who has many things to be thankful for and much goodness to repay.
I have some friends to write good things about, some beer to drink (I believe beer is proof of life being great), some SRV to listen to, and some yule tide to make gay.
Happy solstice. 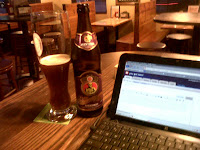 So I was listening to the radio while I puttered around the office this afternoon. And AC/DC came on with their classic Dirty Deeds. Not necessarily my favorite song but one that you hear all manner of random lyrics for… my personal favorite being dirty cheese and the thunder chief. This, of course, made me think of all those other songs people screw up all the time (songs I don’t even like that magically become funny because someone is singing the wrong words at the top of their lungs) like, Addicted to Love & Losing My Religion & Bennie and the Jets and on and on. Being the girl I am I had to see what was on line because I started thinking about all manner of crap like the afore mentioned Bennie and the Jets and how many times have I heard electric boobs?!? Boots people, BOOTS. I digress. I ended up finding a website: Kiss This Guy and spent the next too much time laughing my ass off. Holy crap! I love it! Yeah, I’m so gonna start using some of this stuff. I can’t decide my personal favorite so far…

Might as well face it you’re a dick with a glove (Addicted to Love – I laughed pretty good at this one)
Let’s pee in the corner, let’s pee in the spotlight (Losing my Religion – I know some people that would do this with or without religion)
I want a duck shaped like a triangle, you get me closer to bob (Closer – really? Someone heard this?)

I could go on and on… And I have to admit I used to crack up when my friend’s daughter would walk around singing dropping my guitar, droppin my guitar. It was cute. She was also the one that would sing “it’s getting hot in here, so cut off all your toes” hhhhmmmm. That’s disturbing. But I probably have to go with the misquote of the Manfred Mann Band song (Blinded by the Light) as my favorite. And I actually knew this before I found this website because I couldn’t bring myself to believe anyone would want to talk about being wrapped up like a douche. And what the hell does that mean anyway?? How do you wrap up a shower? Or what dude wants to handle the feminine cleansing item and “wrap it up”? None that I know. It’s revved up like a deuce. Just sharing. And that’s caring as we all know.